Karen Randlev is a graduate of the Johns Hopkins writing seminars where she studied with Elliott Coleman. She also studied with James Dickey in Aspen. Her work has been published in magazines from PERMAFROST to the CHRISTIAN SCIENCE MONITOR. She has worked with Poets-in-the-Schools and given readings in Maryland, Washington State, Alaska, and California. Her poem, OLD WOMAN AND THE ICE CAVE, was awarded a prize (in Alaska) and SCRUB JAY (in West Virginia). Her book, LIGHT RUNNER, was published by Firewood Press as part of a three-volume Alaska Poets series. She has been continuously listed in the directory of POETS AND WRITERS since the 80's. Because of her Alaskan poetry, she was featured in the anthologies, A NEW GEOGRAPHY OF POETS, THE LAST NEW LAND, and HUNGER AND DREAMS. She currently lives in western Maryland. 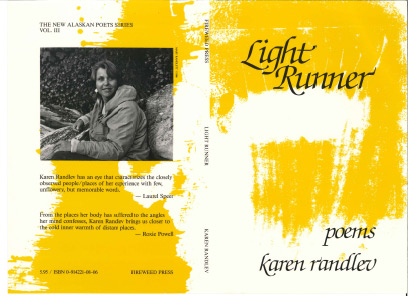