Chris started playing guitar over sixty years ago at the age of seven. As a teenager, his talents with steel-string instruments (acoustic guitar, mandolin, and banjo) were on display in frequent public performances in his hometown of Hagerstown, MD. Anderson appeared on stage for the first time when he was thirteen. While he was in college, a recording introduced him to the Classical Guitar, and he immediately began studies of the instrument.

After graduating, he worked as a full-time musician for twelve years. Chris taught guitar privately and through several regional institutions. He was the first Guitar teacher at Shepherd University. During the five and a half years he taught there, he designed the academic program that was adopted as the curriculum for the first Guitar Performance Degree throughout the university system of West Virginia.

He also played the first solo Classical Guitar recital performed in Hagerstown at the local Community College in 1977. Since his early Classical Guitar performances, Chris has been featured in concert series in Pittsburgh PA, Richmond VA, Baltimore MD, Washington DC, Wilmington DE, Harrisburg PA, and many other cities throughout the mid-Atlantic region.

Anderson's music has also been heard during interviews on WAMU (NPR from the nation's capital), West Virginia Public Radio, Maryland Public Television, and the concert stages of many colleges including Princeton University, and James Madison University.

Recently, Anderson has formed "Sixes Music". It's his boutique online marketplace for Lessons, Recordings, and Books. His 1993 studio recording, "Looking Back", will be available on CD in August 2002, and through digital services in October 2022. Chris' book, "The Fundamentals of Making Music With a Guitar", will be ready for publication in Feb 2023.

In the past few years, Chris spent 400 schooldays doing long-term Substitute Teacher assignments in his local Public School system. He served most often in third to fifth grades. For a number of months now, he has been teaching guitar privately at his home studio. "I've taught guitar lessons through a few commercial studios before. Sometimes the noise and other distractions makes focusing difficult. This is such a nice learning environment." 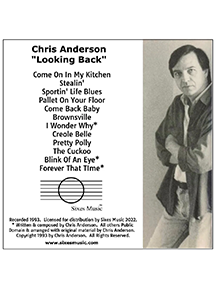