When she retired from teaching a few years ago, she pulled out the box of letters her husband had written to her from Vietnam. For several months, they read their way back to 1967. It was then that she realized just how profound an effect those 21 months had on her— on them, and that theirs was a story that hadn’t been told.

On Veterans Day in 2008, she and her husband took their children and three young grandsons to Arlington National Cemetery, to attend the special services. They passed his former barracks, the parade field where the two had attended ceremonies, the Officers’ Club, and the chapel from which he and his Company daily performed so many funerals for too many young heroes. As they walked the paths through the cemetery, their grandsons, ages 5, 6, and 8, stopped frequently to kneel beside graves and read inscriptions. They whispered question after question to their PopPop. He softly spoke about Veterans Day, war, soldiers, duty, sacrifice, and love of country, as he answered each one.

Walking the length of The Wall, the little boys quietly reached up to hold their grandfather’s hands. They wondered about the pictures, small stuffed animals, flowers, letters, and mementos placed in front of some panels, and why a young man was etching on a paper. Their small fingers traced into soldiers’ engraved names. Standing back, each grandson noticed his own reflection, then the faces of people walking behind them. Looking higher, they gazed up at the sky and images of white clouds drifting across black granite.

Thousands of veterans were at The Wall that day, standing around quietly talking among themselves. Many wore denim, leather, or field jackets decorated with military patches and badges. Others wore caps that identified their units inVietnam. Upon seeing a small group with 1st CAV insignias, Sawyer’s husband instinctively moved towards them. The family stayed back and watched as they all shook hands.

When Vietnam War combat veterans greet each other, a look of shared loss almost too great to bear often passes between them. Many of you have seen that too. Almost half a century since the war ended, but that look that still surfaces so easily in them haunts her. And it became the compelling reason why S.D. Sawyer wrote Prelude to Reveille: A Vietnam Awakening.

Sally fought a courageous battle against a Stage 4 Glioblastoma Brain Tumor from August, 2013 until October 31, 2015. She fought long and hard as there were a lot more stories she wanted to write and ways that she and her husband, Richard, hoped to help veterans. 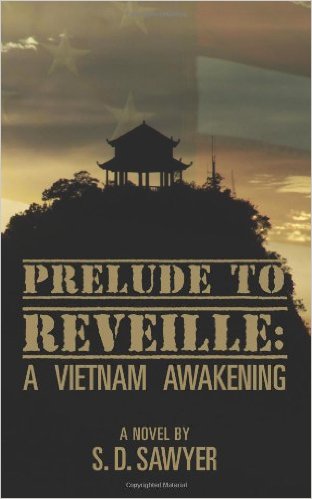